Oil on canvas cm 72 x 26,5 signed (E. Forti) and located (Roma) lower right. On the back, stamps of a Paris art gallery close to Vichy showing the title of the painting in the French version.

Ettore Forti remains today an artist with an uncertain and fragmentary biographical profile. We know that he was active in Rome between the late nineteenth and early twentieth century and exhibited in Berlin between 1893 and 1897, and at the Exhibition of Roman Society of Lovers and Cultors in 1905, presenting scenes marked by an accentuated realism depicting episodes and events of ancient Rome, permeated by neo-Pompeian atmospheres that bring him to the great Dutch painter Lawrence Alma – Tadema. Towards the end of the nineteenth century, classical paintings depicting scenes taken from the vast repertoire of stories and mythologies of ancient Greece and imperial Rome were very popular. In his works, Forti proves to follow the taste of the era, performing paintings in which the attention paid by the painter to the architectures of the republican and imperial Rome is evident, used as scenic backdrops to set anecdotes taken from history and classical mythology. With meticulous details, Forti is dedicated to the representation of mosaic floors and Roman frescoes, conducted on canvas with absolute mastery, placed to decorate the interiors of important Roman patrician houses. 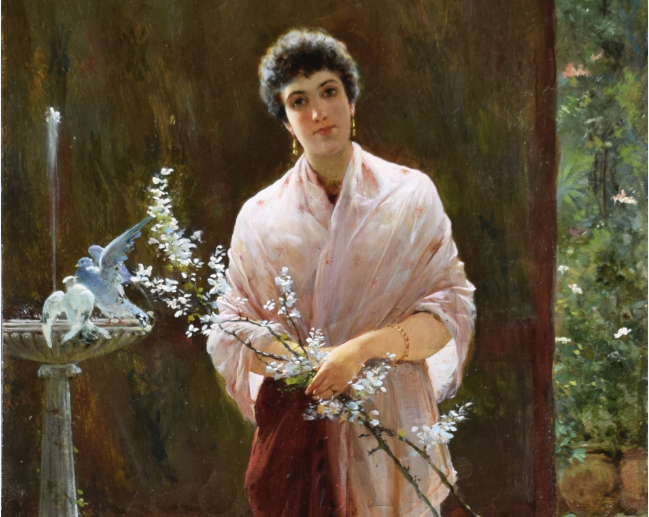 The Roman artist is able to meticulously reconstruct the classical objects and decorations of the Neo-pompeian sphere, even in the painting presented here, in which he combines a grandiose and luxurious environment with an intimate domestic dimension. The marble inlays of the floor decorated with diamond-shaped motifs and floral intertwining lead the eye of the relative to the female figure standing in the center, a Roman matron wrapped in her tenuous pink chiton, bearing twigs of lilies in her hands.
The scene painted by Forti is completed with doves, whose gentle presence gives the title to the work, lying on the edge of the small fountain, placed in the background, on top of a podium with three steps, surmounted by a curtain just bared that allows us to glimpse the piece of landscape. The true protagonist of the painting is the light, however, that bathes the profile of the Roman matron and the petals of the fallen flowers on the ground.