For Drei, 1913, the year of the creation of this sculpture, is a crucial year: having arrived in Rome, winner of the national sculpture retirement, he has the opportunity to get in touch with the art world of the capital city, trying to synthesize different experiences. The “Dancer with the circle” is performed in the same year as “Estasi d’amore” (1913), but it definitely stands out for the decorative taste of the dance step to which the female figure is forced, which turns towards a certain stylization, recognizable especially in the profile of the woman’s face and in the hands that support the circle: a tribute paid to the new suggestions, to which the artist willingly submits, certain of his technical skill, which allows him never to deny the anatomical correctness, well expressed in the figurine of the woman, from the smooth and error-free molding of the long legs and the supple back.

With this work and with “La Serpe” (performed the previous year in Florence), in 1914 Drei took part in his first and important Roman exhibition, the second Secession, reviewed by Mario Lago which in the review that appeared in “La Tribuna”, notes the young man artist defining his works “stylized figures in the secessionist manner, but not without taste”. 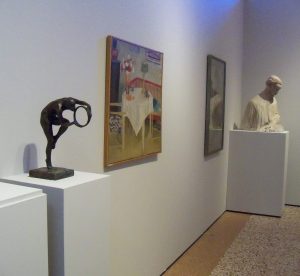 Two other examples of this small sculpture are known: the first in the collection of the Museum of Taverna (RC), donated by Lia Drei and Francesco Guerrieri on May 30, 2002 and on display at the exhibition “European Secessions – the wave of modernity” guested by Palazzo Roverella in Rovigo, in 2018; and the second presented by the Francesca Antonacci gallery in 2005.

A very sensitive sculptor, painter and draftsman, Faenza by birth but Roman by adoption, Drei was able to express his temperament with the same intensity both in the great works performed for public clients – to the city of Rome he left some of his most famous works – both in small sculptures appreciated by art lovers and intended for private use. It should not be forgotten, especially in the area of youth production, the creation of refined handicraft objects, perhaps his most noteworthy things, such as the numerous bronze and ceramic cups made around the 1920s and 1930s. The pictorial activity, considered as a private experience, instead began around 1915, placing itself within the artist’s career as a further field of experimentation.