Son of Charles Coleman, an English painter who settled in the Eternal City, Enrico followed in his father’s footsteps, and soon he showed abilities that led him to equal and then overcome the success achieved by Charles. Of calm and absorbed character, he visited and observed the entire region of Lazio in all its more and less known territories, devoting himself above all to the representation of horses, grasping the character and the articulation of the movement with an extraordinary truth.

Beyond and outside the studio from life, which marked all his activity, we find in Enrico’s work, only towards the Nineties, the adhesion to “artistic fashions” of the moment, with a turn towards the fantastic world of the Böcklin. Even if the contact with an artistic direction extraneous to his verismo, always runs along the thread of an animalist pictorial creed. 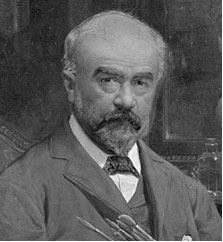 The animal kingdom characterizes his best landscape scenes, the undisputed protagonist of his poetry, as in one of the two watercolors presented here, a technique adopted mainly by the artist during his career, where an elegant lady in a long dark dress, a harnessed headdress from an elegant blue bow, it is portrayed riding a horse in the center of the composition. The action takes place on a day bathed by the light of the first noon in a pristine part of the Roman countryside, the theater of artistic research conducted by Enrico Coleman who identified his aesthetic style in the genre of the rural scenario, placing himself at the head of the naturalistic current of Roman painting of the second half of the nineteenth century. His loyalty to the theme of nature, pursued throughout his life, was so tenacious and constant that he induced the artists who, in 1904, gave life to the group of the “XXV of the Roman Campaign”, to give him the presidency of the association.

The pair of watercolors presented here is completed with an unconventional subject with respect to the themes and subjects dear to the painter’s palette: a trip to the lake, probably that of Nemi, already represented by the painter in an extraordinary oil of 1907, now preserved in the Gallery municipal modern art of Rome. The gallant scene consists of five figures, three masculine – the silhouettes of sailors are delightful – and two female – executed with rapidity of execution but with unparalleled efficacy – about to set sail from the shores of Lake Nemi on the Adele boat, whose name it stands out on the wood of the boat on which the shadows of the trees in the foreground are projected.