The art critic Raffaello Giolli, who already started talking about Edina Altara in 1916, appreciated the artistic research of the young Sardinian painter so much, that in 1917 he dedicated to her the cover of the May issue of «Pagine d’Arte», choosing a version, different for some different small details, of the collage presented here, “Le Rose di Barbagia”, a work dated 1915 and exhibited in Milan at the 1917 Sardinian Exhibition. Starting from this very refined assembly of colored papers , Giolli dwelt with these words on the poetics of the Altara:

“The three red spots of the Roses of Barbagia have this sense of the sudden outgoing, they give evidence of this interior and violent pictorial instinct […] Here you see well instead the organic unity of these impetuous spots. Red spots come out on the black sheet and flow down to leave phosphorescent ponds. White spots. Black masses mysteriously raised in the black background. The Roses of Barbagia are not really only three women in Sardinian costume. […] Because the pictorial intuition emerged in this substantial and pure purity of its imagination: of floors raised on rhythmic curves, of full and vibrant tones, large vigorous balances, built only for the joy of a warm architecture that can hold everyone dreams. Look at how he was able to put white on white: how accurately he cut those little lips, those black eyebrows, into his paper. As she was also attentive to a mischievous mole. “ 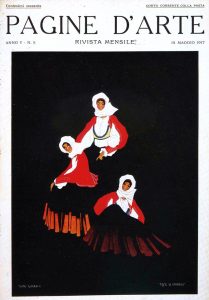 Born in Sassari in 1898, thanks to the advice of Giuseppe Biasi, the greatest Sardinian painter of the time, from the children’s games with colored paper Altara came to create cardboard toys and collages depicting Sardinian folk types and scenes. Of the very fragile toys, today only the photos remain that – according to the same reviewers who published them – do not do them justice. Simple, colorful and geometric, they remind us of wooden puppets that a few years later would have begun to create Fortunato Depero, and to the cubo-futurist stylizations in general. As for the collages, the best of the few remaining, like the one presented here, are striking for the accuracy and effectiveness of the synthesis. Presented in 1916 at the Milan Toy Exhibition, Altara’s works attract general attention; when Biasi includes them in the 1917 Sardinian Exhibition at the Cova, the first national release of the Sardinian artistic movement, the author appears as a revelation. A woman-child (at the time of her debut, she is just eighteen), self-taught, not spoiled by the artistic school or even by the school tout court, devoted exclusively to the representation of the Sardinian agro-pastoral world, Altara reflects the primitivist triad that unites the feminine and the popular child.