A sculptor of Sicilian origins (in Polizzi Generosa, his native town, the bust of the Duke Federico Lancia di Brolo, which he executed is still kept at the Municipal Library), with a training still unclear, Domenico Pagano exhibits at the National Fine Arts Exhibition of Rome in 1883 (“Moses on the Nile” and “An Arab”) and in 1893 (“The Count Ugolino” and “Joke at the fountain” in 1893) and at the Promotrice of Turin in 1884 (“At school for strength” and “A child on the water”).

In the same 1884 is among the participants in the municipal competition for the monument to Cavour to be erected in front of the Palace of Justice in Rome: heis among the four worthy candidates, together with G. Zappalà, F. Gallori, and S. Galletti, the latter actual winner of the competition. The Municipal Gallery of Modern and Contemporary Art in Rome preserves its sketch for the competition. In 1887 he presented “La Carità di Sileno” at the Venice International Art Exhibition. Two years later he received an honorable mention in Paris. In 1895 he created the bust of the patriot Giovanni Nicotera for the Gianicolo walk in Rome, winning the competition with a model signed Ugo Antonio “which by declaration of the author is the work of sculptor Domenico Pagano”. 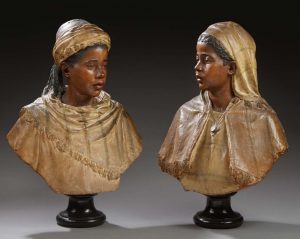 Central in Pagano’s work is the intensity of human emotion, without neglecting a precise description of the hairstyles, the jewels, the accessories worn by the characters taken from the Arab world, protagonists of his multi-material plastic that earned him sales success in Europe and in America. It is the case, for example, of this pair of busts of Berbers, shining testimonies of an exoticism that was becoming established in the art of the second half of the nineteenth century, studied with skillful skill by Pagano in the choice of details that enhance the richness of composition and formal construction. With the rediscovery of this pair of extraordinary busts made of Pagano terracotta, he emerges as an eminent ethnographic sculptor whose work reflects a keen interest in the East, its culture, its traditions and its iconography.