Oil on canvassed paper made in 1952, cm 65,5 x 43,5 signed (Cagli) lower right, where the artist’s inscription addressed to Leopoldo Petrucci signed in 1973 is visible.

Trained in Rome, Cagli spent a long time in Paris and New York. He actively participated in the modern pictorial movement, experimenting all the techniques, including encaustic and mosaic, first in the “Roman school”, then through subtle formal research characterized by a fifteenth-century perspective, punctuated in an almost metaphysical sense in the chromatic values and of movement, up to arrive at abstract compositions. He then turned to realistic reasons to return to a search for spatial and geometric rhythms. His graphic activity and his commitment in the monumental and applied art that led him to important achievements (Fontana di Terni, 1931-35) and to participate with originality in the rebirth of the high school in Italy (tapestries of Asti).
Another area of application of his artistic language was the theater: numerous musical works, such as Rossini’s “Tancredi” and Roussel’s “Bacco e Arianna” (Rome, Teatro dell’Opera, 19 January 1957), and the Greek tragedies, like the Misanthrope by Menandro (Vicenza, Teatro Olimpico, September 4, 1959), for which he created the sets and stage costumes during the Fifties. Precisely to this experience is this figure of bishop, a study conducted for the realization of stage costumes of the “Tancredi”, represented in Florence, at the Teatro della Pergola, May 17, 1952. 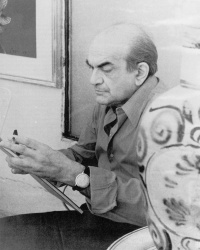 Numerous in Italy, more than 30, the events that – with personal or collective exhibitions – in the Sixties pay tribute to the various fields of interest of the artist whose name, known in Europe (exhibitions in Paris, Liverpool, Dublin, Helsinki, Stockholm, Copenhagen, Oslo, Hamburg, Munich, Athens) now resounds in the farthest points of the earth (Teheran, Tokyo, Algiers, Sidney, New York). The participation in the XXXII Venice Biennale of 1964, in which he is present with a personal room, also helps to make him known to the general public, consecrating his international success.