“Things, that is, and ideas and stylistic solutions – nature and culture – are a single field of investigation and discovery, the total forms on which the artist’s creative personality must act. And it is this, ultimately, that conditions and transfigures and reinvents it. Cagli’s design is as clear as his knowledge and awareness of the way he acts on forms, of taking them over as elements of communication of his intellectual and sentimental ruin. It is a simple and absolute language, an enlightenment discourse, a park of adjectives, all of meaningful words: snappy definitions that imply an extraordinary complexity of philological and empirical, cultural and intuitive references. He has the perfect purity of the humanistic dictates, which do not dogmatically close the aspects of life in academic statements, but which reveal, from time to time, with extreme perspicuity, all the data of a lucid knowledge of the truth, understood as stages and cues of a inexhaustible operation of investigation, always open. It has the mysterious beauty of the mirror, the disturbing, yet rationalizable magic of a prismatic screen.”

With these words, Franco Russoli synthesized the artistic research of Corrado Cagli, a central figure for abstract trends that characterized the post-World War II aesthetic trends, elaborating works of great originality and theorizing an extension of the “primordio” that influenced for example the abstract turn of Capogrossi. 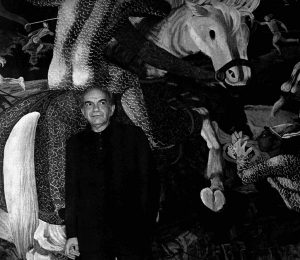 Precisely a “prismatic screen”, an image used by Russoli to define the magical rationalism of Cagli the abstractist, constitutes the noumenon of the composition presented here, executed by the Marche painter in the second half of the Fifties. The lively eclecticism of Cagli squading on his horse of the Sixties is witnessed by the numerous exhibitions that span the decade. Many in Italy, more than 30, the events that – with solo or group exhibitions – pay homage to the different fields of interest of the artist whose name, known in Europe (exhibitions in Paris, Liverpool, Dublin, Helsinki, Stockholm, Copenhagen, Oslo, Hamburg, Monaco, Athens) now resounds in the most distant points of the earth (Tehran, Tokyo, Algiers, Sidney, New York). The participation in the XXXII Venice Biennale of 1964, in which it is present with a personal room, also contributes to making it known to the general public, consecrating its international success.