The reconstruction of the catalog by Corinna Modigliani, cousin of the most famous Amedeo, is today complex, since her works, acquired at the time by private individuals, are almost totally scattered, preserved in private and unpublished collections. According to the titles and the little that until now has resurfaced, prevails in her first production a predilection for the minor arts, such as miniatures and, above all, velvet paintings, with subjects related to the floral and animal world, as evidenced by the works presented in the first documented exhibition occasions such as, for example, the LXX Exposition of the Society amateurs and lovers of fine arts (Rome, 1900) or the III Exposition of art (Livorno, 1901).
From the very first years of the century, however, Corinna began to exhibit paintings as well; already in 1900, in fact, she participated with a work of sacred subject, The Madonna of the angels, at the Exposition V. Alinari competition (Florence) and with several portraits at the aforementioned LXX edition of the Society Exhibition amateurs and lovers.
From that moment on, although cultivating both the landscape and still life, the painter especially favored the genre of the portrait and the subjects linked to childhood, with oil or pastel works, characterized by a lively technique and a palette of experienced skills, mainly intended for private clients. This is the case, precisely, of this triptych of small painted tables, an object of furniture in which the typical pictorial ductus of Modigliani is evident, given by rapid touches of color and soft chromatic nuances, consecrated to the theme of motherhood and of the infancy, incarnated by the central group, composed of a mother holding a child in a white robe. 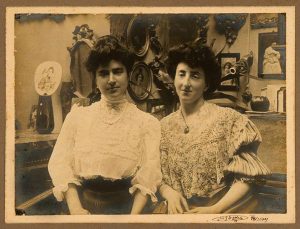 With the participation in 1911 at the Rome International Exposition, where she presented “Sorrisi di bimbi”, an exemplary work of her rich production dedicated to the world of childhood, a particularly intense period opened up for her, which perhaps marked the peak of her affirmation as a painter.
Occasionally he also dedicated himself to engraving, specializing in the use of etching, a technique learned improved by self-taught, with which he made landscapes, figures and portraits, rendered by a tight texture of signs, with accentuated luminous vibration.