Eight biennials along her career, prolific and vital, Carla Accardi, the lady of Italian abstractionism, belongs to that generation of women who since the forties, has decreed the end of the marginalization of female creativity. This her work is located in a crucial phase of the route led by the Sicilian artist. Made in 1964, it is one of the last artworks of her research, undertaken since the mid-fifties, oriented in the direction of the signs’ automatism: the sign-color poetry, which is divided in sets of pictorial segments lying on homogeneous funds, is the fil rouge that binds the works on display in the solo-exhibition that Accardi had at the Venice Biennial, precisely in 1964, year of creation of this “Greenred”, “autorigenerativo” work which focuses on her unmistakable pictorial calligraphy, trademark of her production.
The artistic proposal showed during the important Venetian window, characterized by an unprecedented originality of expression for the art scene of those years, places Accardi among the most refined interpreters of group called Form 1, inspired by Marxist ideology which, in the graphemes similar to the sickle’s shape distributed on the work presented here, appears visible in watermark. 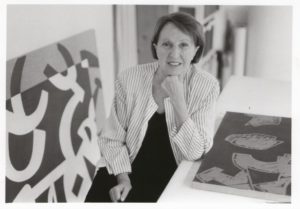 In 1965, Accardi leaves tempera in favor of colored and fluorescent paints that she applied on transparent plastic substrates, such as sicofoil, leaving the canvas size and intervening in space, with an approach to artistic practice that will impact a lot on the development of a new language spread in Italian by Arte Povera, movement founded in 1967 by Germano Celant.
The environments and the tents – “Tent”, 1965-66, “Orange Environment”, 1966-68, “Triple tent”, 1969-71 – in which Accardi dialogues with the most radical and innovative Italian experiences of design and architecture, build nomadic and anti-institutional areas, “rooms by all themselves,” echoing the need to create a separate space, a precondition to the feminist practice of selfawareness, concept shared with the militant critic Carla Lonzi.