The quality of light and the extraordinary definition of the details are the most surprising aspects of the still lives produced by Croatto in the 1920s and 1930s. Criticism has highlighted his “verism”, the point of arrival of a gradual evolution, meditated through frequent travel and the study of Italian Renaissance painting, which led him to “a sort of modern pictorial classicism” (Firmiani, 1976).
The clarity of the sign, the sharpness of the colors, the plastic force of the objects induces the Triestine master to express pure naturalism, a meticulous attention to the real figure. The sense of finitude, vivid in the bodily evidence of brilliant, almost enamelled figures, characterizes the last works and shows an artistic evolution that is accomplished in the maturation of his feelings. 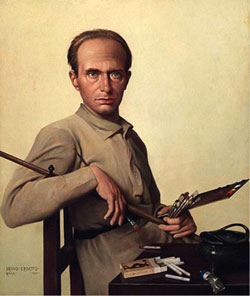 Precisely the essential traits of his palette are visible in this astonishing still life, in which it is evident the taste for the intrinsic qualities of different materials, specifically chosen for the characteristics of shine or transparency or sphericality, and his witty ability in the appropriate color matching, harmonious in dialogue established among the Buddha little sculpture, sometimes used by the painter as a marginal element in some paintings, and the sumptuous drape, real scenic backdrop of the entire composition.
An oriental motif that embodied by the Buddha sculpture, that is absolutely not casual, but which, on the contrary, is witness to the special interest of the Triestian painter for Oriental culture, a passion that led him to assemble a personal collection of Chinese objects, as Sibilia remembers: “A magnificent artist: his studio is already, by itself, a “milieu” of art from the most strange and most original art of the Far East, from the rugs that cover the floor, the vases that animate the tables, the curious things populating the scans, paintings and prints that look a bit over all. It seems to be in Japan or China and if it were not his job and if this man was not all nervous and all “verve” – looking a little Japanese because it was glabrous and dry – the illusion would be complete».
Croatto’s works are preserved in numerous European and American public and private collections, including the Revoltella Civic Museum in Trieste, the National Gallery of Modern Art in Rome and the Milan Modern Art Gallery.