A white and a black drapery, with their angular drapery, form the scenic backdrop for these two still lifes composed of vases, different in shape, material and decoration. In the first painting, a vase with a matt surface with decorative plant motifs contains a bouquet of magnolias, clumps of color crossed by the light that penetrates from above, from the left, with respect to the space represented, as evidenced also by the reflections on the chinoiserie in the foreground. In the second painting, instead, it is a triumph of yellow roses that dominates the composition which includes a small oriental-style casket of incredible transparency, painted with an extraordinary tactile rendering, and a glass from which hangs a very refined necklace. Taste for the intrinsic qualities of different materials, specifically chosen for the characteristics of gloss or transparency or sphericity, and sagacious ability in the appropriate combination of colors, constitute the peculiarities of these two still lifes by Bruno Croatto, an excellent engraver as well as a talented painter. 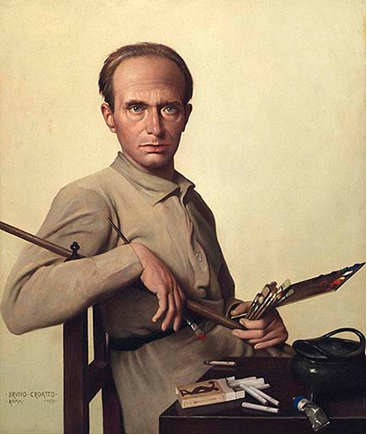 The “verismo”, his attachment to reality, sometimes for some “all too objective”, point of arrival of a slow evolution, but meditated through the frequent trips and the study of Italian painting, has been emphasized of the Trieste painter. of the Renaissance, which led him to “a sort of modern pictorial classicism” (Firmiani, 1976). The clarity of the sign, the sharpness of the colors, the plastic strength of the objects induces Croatto to express a pure and refined naturalism, a meticulous attention to the real datum. The sense of finiteness, alive in the body of brightly colored, almost enameled objects, represented above all in the works of the thirties, like the still life proposed here, demonstrates an artistic evolution that takes place in the maturation of his feelings.

In particular, these two paintings are almost phantasmagories because they are deduced from a transfigured oriental world wrapped in an atmosphere poised between history, myth and religiosity. As Silvio Benco aptly wrote, “as far as we know Croatto does not have direct knowledge of the East; he sees it through the impressions of those who were there and through the powerful excitement of his imagination. Nevertheless he gets surprising effects from which even the coldest and most cautious confess themselves defeated “.