“It is above all in portraying the countryside, who knows, understands and loves as few know it and know really understand it and love it and where he spends most of the year, Beppe Ciardi results the most sensitive painter.” With these words, Vittorio Pica in 1912, from the columns of «Emporium», exalted the palette of the Venetian painter and, in particular, the rural setting scenes that gave Ciardi a chance to experience very bright colors and strong contrasts, making a more liberal use of light and color, compared his father Guglielmo and his sister Emma, with whom he formed a family of artists, able to write the history of Venetian painting at the turn of the century, renewing it in color values and in formal connections.

The visceral passion for the countryside is demonstrated by the painter’s life, spent with his family in the homes of Venice, Canove Asiago and Quinto di Treviso, alternating activity of painter to that of farmer. 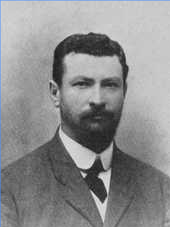 The painting presented here, a lyrical sunset on a scene of Veneto open countryside, where a peasant girl looks at the horse parked, caught to drink at the spring, plugs into the creativity of the painter showed by the corpus of nocturnal and crepuscular silences with which Beppe, along with his father and sister, take part in 1906 to the exhibition (hall X) curated by the city of Milan to celebrate the opening of the Sempione pass. We can find in our painting that contemplation of the countryside and the ability to transfer onto canvas the atmosphere of a mythologized rural world, in which Beppe finds his source of inspiration. This “Evening”, superb test of a study from life led by the painter with rare pictorial sensibility, is distinguished by a dense brushstroke, constructive and full of vibrations, next to a pointillist technique that Ciardi had accepted at least in part, influenced by the long friendship with Victor Grubicy, who approached him to the Segantini manner and its striking luminosity.

Beppe Ciardi sealed his artistic career achieving considerable success in the years 1912-13 when an entire room of the Venice Biennale hosted his forty-five canvases documenting the various stages of his painting and at the exhibition of Munich, where he was awarded the gold medal.