Narrator for images, Arturo Martini was commissioned in 1937 to sculpt the high relief for the Palace of Justice in Milan (architect M. Piacentini), on the theme of Corporate Justice, to be placed side by side with Biblical Justice and Roman Justice, respectively by Arturo Dazzi and Romano Romanelli. The sculptor from Treviso faced the subject – arduous and with insidious current implications – with the usual iconographic and technical freedom: the Carrara marble was folded to a pictorial use, with different lighting effects on the surfaces now blanked now polished, while the celebratory theme it was transformed into a metaphor for civilization: justice oversees social coexistence and harmonizes human relationships, on which the family and works of charity are based. The relief, which inaugurated Moretti’s long collaboration with the Nicoli company in Carrara, was placed in the palace in September 1938. The Carrarese effort earned Martini a serious form of sciatica, which forced him to a long recovery spent in Burano: it was then that he approached painting, hoping for a new, and perhaps easier, career. 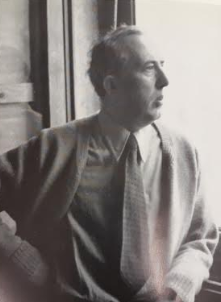 When Martini begins to think of painting as a way out of monumental sculpture, a series of works dedicated to painters and painting also appear, such as this “portrait-caricature” (perhaps identifiable with Arturo Tosi), in which the artist is caught in a moment of painting en plein air, the canvas resting on a tree trunk, in the act of transferring the immediacy of nature onto the picture, with a snap and an act typical of the more traditional and stereotypical concept of the painter. The compositional fact in itself is interesting, with the calls of the legs and arms spread apart and parallel and the precarious balance of the whole. Just from 1938, the year of execution of the sculpture presented here, Martini turned to painting with growing expectations: given in February 1940, in the halls of the Milanese Barbaroux gallery, his first painting exhibition, received with interest and good sales success.