The artistic training of Arthur Von Ferraris starts with a first trip to Vienna that the Hungarian-born artist visited when he was just a teenager. In the Austrian capital, Arthur attended the workshop of the artist Joseph Matthaus, who specialized in portraiture, before moving to Paris in 1876. In the French capital, von Ferraris studied with Jules Lefebvre at the Julian academy, and then with Jean-Léon Gérôme at the Belle school Arts: both of these masters, supporters of classical educational methods, based on the assimilation of the techniques of drawing before and then of painting, affect Arthur’s artistic path. Thus Von Ferraris, strong of the Viennese and Parisian experiences, began to exhibit at the Salon des Artistes Français in 1881, just a year after starting his studies with Gérôme.

By the late 1880s, von Ferraris had opened a studio with another orientalist painter, Charles Wilda, on the Boulevard de Clichy. A skilled portraitist, he had continued to seek the favor of the wealthy classes, guaranteeing himself a good economic income: many of these portraits were exhibited at the Paris Salon. His orientalist paintings, regularly exhibited at the Salon at the end of the 1980s and beginning of the 1890s, also had some success. Among the most important are: “The smokers of hookah” (1887), “At the El Azhar mosque, Cairo” (1889), “Visit of the Great Sheikh to the University of Cairo” (1890), “Descendant of the prophet” (1891) and “Bedouin at the arms dealer” (1893). Also distinguishing himself at the universal exhibitions of 1889 and 1900, as the leading artist of the Hungarian section, Von Ferraris has his roots in his passion for oriental atmospheres on a training trip completed in 1884, perhaps the most important journey inside of his career: it is, in fact, in the winter of 1884-85 that von Ferraris went to Egypt with his friend Ludwig Deutsch, an Austrian painter residing in Paris. The two artists returned to the French capital with a rich repertoire of drawings, sketches and photographs. The enchantment resulting from the encounter with oriental customs and settings led Arthur to return to Egypt in 1892. 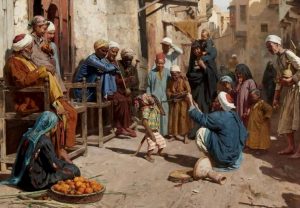 Coming from this second trip to the land of the pharaohs, he created the opera ‘Le Caire 1892’, a painting he presented at the Salon des Artistes Français in Budapest with the title “The wise monkey”. It is a delightful anecdotal painting that represents a typical glimpse of Cairo with numerous characters gathered around the trained monkey that entertains children and adults. It is from this extraordinary painting that the protagonist of the work presented here comes: the monkey in the center of the aforementioned composition becomes, in this study probably preliminary to the definition of the large format painting, the optical and chromatic fulcrum of the small table that stands out his yellow and green diamond-patterned shirt, the rattle cap, the bell tied to the bonnet, the striped pants.