“The Milanese painter Antonio Moretti is a self-taught. He devoted himself completely to art after a troubled working life, making sacrifices with an admirable will. He has worked a lot and is not very exposed. He remembers him a small personal exhibition at the Artistic Family three years ago, an exhibition that drew the attention of the critics for the seriousness with which it was prepared. The “Corriere della Sera” wrote: “Moretti is a varied and pleasant painter. A palette rich in juicy doughs and delicate harmonies has formed, using it with a nice sense of color […] It is a painting that is all clear, clear and sunny. Also the portraits are to be noted […] “. After that exhibition, the painter’s name has rarely been used in Milan’s art exhibitions: it reappears now on the occasion of this individual. by Antonio Moretti. Son of a chiseller, after completing the first tests in the Milanese area at the Artistic Family, in 1915 he was called to participate in the first world war; experience from which he draws inspiration for the realization of some works that support in his repertoire the favorite Milanese views, landscapes, still life, female figures and domestic interiors. In 1925 he presented himself with three other artists in an exhibition set up in the rooms of the former Palazzo Edison in Milan, and a few years later he staged, again in Milan, a solo exhibition at the Galleria Scopinich (1933). Leaving the city in 1937 to move to San Remo, from 1955 he chose to live in Rome. 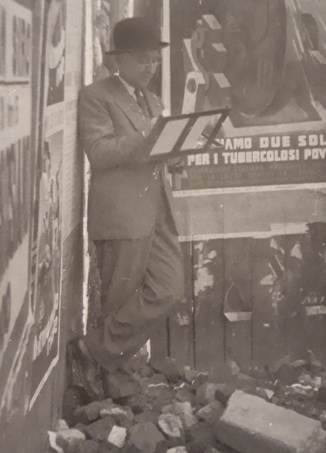 The protagonist of the painting presented here is Letizia Utili, with whom the painter had a love affair after the failure of the marriage relationship with Cornelia Pellegrini. The work is part of the corpus of paintings executed by Moretti in Sanremo, falling within the framework of a reassuring naturalism, traversed by a certain vaguely secessionist taste, evident in Letizia’s tapered nudes caught in the back of their apartment. Around the thirties, the woman frequently attended Moretti’s studio and often posed as a model, offering the self-taught painter the opportunity to practice from life in the realization of the human figure. The increasingly confidential relationship between the painter and the model is transformed “with the passing of the days into a more affectionate feeling” and the couple decides, both to live quietly their clandestine relationship – Antonio Moretti is still married to Cornelia Pellegrini – and to alleviate the bone problems that afflict the artist, to settle in Sanremo. In the Ligurian town, Antonio and Letizia will spend about twenty years, from 1937 to 1954.