Pastels on canvas cm 34,5 x 50 signed, dedicated (a Liborio Merolli) and entitled at the centre.

In the context of the second futurism Antonio Marasco embodies the figure of a tireless animator not only in terms of artistic research that leads to the Manifesto dell’Aeropittura (Rome, 1929), but also at the level of organization of cultural initiatives, with events carried out together to the Tuscan Futurist group, in which it had been inserted since the first acquaintances of the artistic environments of Florence. In fact, around the new issues raised by the debate in the magazine “Lacerba”, Marasco had the opportunity to form himself as an intellectual first, and then as a figurative artist: his adherence to Futurism dates back to the same period in which Rosai, Sironi, Prampolini, Depero and Dottori (late 1913 – early 1914): they are called “Transiting Futurists”, as a sign of distinction from the first signatories of the 1910 Manifesto and to signify a certain independence from the organization of the movement. 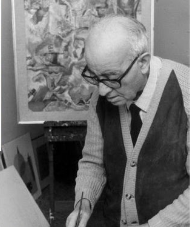 Antonio Marasco’s painting marks the evolution of Boccioni’s plastic dynamism in the direction of a more constructivist vision, in which the forms are elementary and the figures are treated bidimensionally. The works carried out between 1929 and 1931 are the highest examples of this line of research. Urban landscapes constructed in a geometrically absurd manner emblematically represent the development of the Futurist concept. The multiple perspectives, at the limit of the impossible, give back a para-surreal atmosphere that suspends any residual realism, giving the figures a sense of metaphysical estrangement.

A certain Pythagorean rationalism, where everything is brought back to an ideal metric, characterizes the second season of its activity. This is the case of the work presented here, “Matter’s sounds”, datable to the early Sixties, in which the reference to Bragaglia’s synaesthetic painting is evident, given by the chromatic vibrations that cross the entire composition. The work coincides with the period of maximum affirmation reached by Marasco, protagonist of two important exhibitions held in the fifties: in 1950 a solo exhibition at the Art Gallery of Yale University and in 1959 a major retrospective at the Palazzo delle Esposizioni in Rome.

You can adjust all of your cookie settings by navigating the tabs on the left hand side.