Acrylic on canvas cm 65 x 55 signed (Corpora) lower right and authenticated on the back by the painter (Rome, june 1989)

“Finally found the forgotten nature, the coordinates of space and time reappear: memory of space and feeling of time, says Corpora, but also, one could say in Bergsonian terms, matter and color as feeling and memory. So this painting … discovers that the horizon is not the boundary line but the infinity of space, the horizon is the first floor as the farthest. All the horizon space is nothing but a sum of diaphanous and palpitating layers, sometimes torn like spiderwebs and full of floating lumps, where light sometimes jams and sinks, elsewhere it becomes engorged and shines … Even the impressionist precept of the picture that one discerns only from a certain distance is revoked in doubt: the landscape image invites, but the closer one gets, the more the colored signs cease to seem herbs and flowers and discover their true substance, color. We know that nature is illusion (or utopia), it is we who make it and undo it with our hands. Like all illusions, it is denied and immediately denied. But the image is not a verifiable hypothesis, it is true in its reality of image, and not for this reason the thresholds of conscience and thought are forbidden. The night and the death of the conscience would be the arrest of the imagination, it would be an eclipse of nature and the end of life. As a lesson to contemporaries, it is not untimely ». This articulated critical note by Argan, written on the occasion of a solo show by Corpora entitled “Horizon Line”, appropriately focuses on the two main vectors of painting by one of the greatest interpreters of international abstractionism, namely light and color. 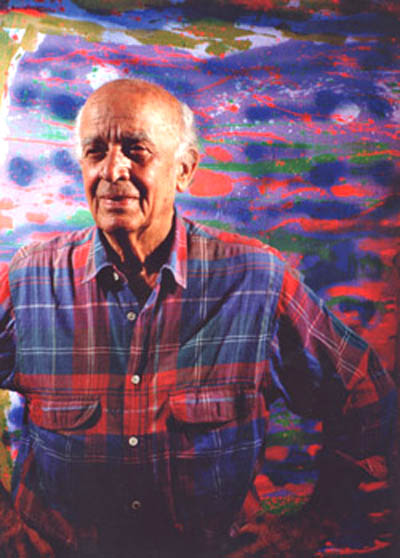 Two primary elements that return to the work presented here, performed by Corpora in the late 1980s, in a particularly important phase of his artistic career. The neo-cubist decomposition merges with a search for chromatic values, drawing reflective prisms on the canvas, spiderwebs of light that evoke the changing colors of the caprese marine mirror, with its luminous accents and the vibrant interpenetration of cobal and pearly nuances. The work fits into that period of Corpora’s artistic activity, in which, supported by critics such as Pierre Restany and Cesare Vivaldi, his painting acquires great expressive freedom, which also makes use of innovative techniques, such as the one that Corpora himself calls “Mural”, and “dripping”.

The eighties represent a moment of great success for the painter: the decade opens with a personal exhibition at the Bayerische Staatsgemaldesammlung in Munich in 1981, which presents 20 large new canvases. In 1987 the National Gallery of Modern Art in Rome dedicated a retrospective exhibition to him, followed a year later by the Gallerie dell’Accademia in Venice. In those years, and in subsequent years, Corpora does not cease its activity and continues to paint, working in particular on the technique of watercolor.