Oil on canvas cm 28 x 37,5 signed (A Pasini) and dated (1869) lower left. On the back, label showing the following indication “Caffe con portici a Beicos, Costantinopoli”.

In the biography contained in the catalogue of the last exhibition dedicated to Alberto Pasini, held in 2014 at the Accorsi Decorative Arts Museum – Ometto of Turin, Giuseppe Luigi Marini wrote: «The same genuine orientalists intended clearly to distinguish themselves from many colleagues, even of fame, which, riding on fashion – the so-called orientalistes en chambre – the Mediterranean had not crossed it. They painted harems and odalisques, carpet merchants, mosques and minarets in their studio, on the basis of engravings, photographs and folkloristic turban and hookah paraphernalia. Pasini will implicitly reaffirm through his works and explicitly in his written interventions the distinction between his being an Orientalist, who was born from the full-fledged, direct experience, not only of a de visu and followed knowledge of the places, but of the long time spent there and among the people ‘real’, interpreted and studied in everyday life, and the oriental fashion, which subrogated the truth with fashion inventions».

The painter born in the same city of Giuseppe Verdi – Pasini was born in 1826 in Busseto, the same Emilian center that thirteen years before gave birth to the famous composer – in fact visited the East several times in the period between 1859 and 1873. In mid-December of 1859, fresh from the medal pinned to his chest after his success at the Paris Salon, visit Egypt. It is a journey that lasts until August 1860. Alberto can work calmly, without constraints. Marini again notes, “expressing his interest not for the antiquities of Giza, but for the daily life in the city: narrow streets, squares and bazaars animated by everyday people”. Similar subjects also portray them in Beirut, Jerusalem and Athens. 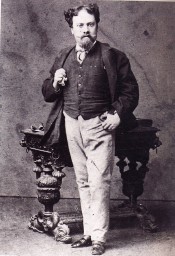 The fame of the unconventional Orientalist grows: exhibitions, exhibitions, private purchases, prizes. Constantinople, where he lands on 26 October 1867, will consecrate his art and bring considerable economic benefits, even if, in some ways, he will mark precise creative boundaries. In fact, the great merchant Goupil makes Turkish subjects among the most coveted pieces on the market, and on these he will ask Pasini to concentrate his work. A work that we can find in its fullness in this oil in which the painter’s eye stops to observe a coffee in Beicos, historic district of Constantinople, reached by the painter in 1869 aboard the train that would later be named Orient Express. The colors, the light, the situations and the moments stopped on the canvas tell a wonderful and contradictory East, poor and rich, dirty and sparkling. And because of all this, true. Pasini has never betrayed him, never accepted to compromise, loving him and perceiving it as a homeland of choice, making it be reborn in his paintings.