Mixed media on everted canvas of 70 x 70 cm, signed (Bonalumi) and dated (83) on the back. The work is archived at the Bonalumi archive in Milan, edited by Fabrizio Bonalumi.

From his first solo – exhibition in 1956 at the Totti Gallery in Milan, at the latest retrospective exhibitions, Agostino Bonalumi’s works have been around the world marking a steady rise in prices over the last 15 years. Friend of Lucio Fontana, Enrico Baj, Piero Manzoni and Enrico Castellani, Bonalumi is part of the Milan artistic sphere of the 1950s.

Already in this period are clear his artistic tendencies and his choice to deal with paintings in a sculptural way, with an architectural vision rather than a painter. Thus result the first extroverted canvases which reveal a strong taste for matter and a preference for tridimensionality. Painted with a mixture of concrete and color, they come in a rough and embarrassed surface and are well suited to the artistic research of Manzoni and Castellani with which Bonalumi forms the group bearing their names, and which will be exhibited in 1958 at the Pater Gallery of Milan, then to the cities of Rome and Lausanne.

A long collaboration with the Naviglio Gallery in Milan – from which the first large monograph by Gillo Dorfles comes out – several invitations to the Venice Biennale (where in 1970 he was assigned a personal room), and then continued his artistic journey activities in Mediterranean Africa and the United States. He participates in the Biennial of Sao Paulo and at the Biennale dei Giovani in Paris in ’67 and ’68, and just in these years his paintings-environment were born as “Blu Abitabile”, “Grande Nero”, “From yellow to white And from white to yellow”, which consider the environment as primary and psychological activity of man. 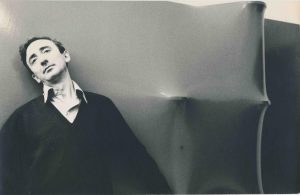 At the beginning of the 1980s, and more precisely in 1983, dates back this shaped canvas: it was Bonalumi himself to clarify the process of making this type of composition in a written entitled “Dialectical Evolution”: “In the persistence of estroflexion change the technique, the means, the tools by which the surface is pushed outward, or pulled inward, creating the thought of a space behind the work. “

The extroverted canvas represents “a methodological principle, a stylistic invention,” as Fiz pointed out, to realize the “overcome of the representational plane” through infinite declinations, such as “humanized geometry, even anthropomorphic”, always with formal and unshakeable consistency.